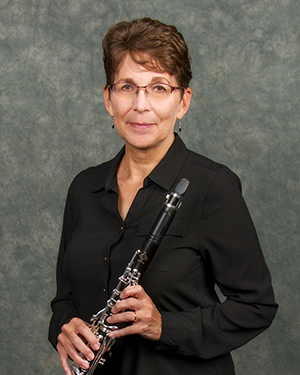 New York native Janice Bengtson joined the LR Winds in 2017 and became principal clarinetist in January 2018. Janice served twenty years as a clarinetist with the U.S. Air Force Band, which lead to many opportunities to perform, record, and travel. She has performed on over 30 commercial and Air Force Band recordings, some of which received favorable reviews published in Gramophone and Fanfare magazines, and  one  earned a Grammy Award – Grand Serenade for an Awful Lot of Winds and Percussion by Peter Schickele (Telarc Label, performed by The National Symphonic Winds.)

A former Springdale, Arkansas, director, Janice has published articles in the School Band and Orchestra Magazine, and coached young clarinetists throughout the Springdale program, in addition to starting an average of 190 students each year in her own program. In addition to performing with the Little Rock Winds, she performs with the Arkansas Winds, Bel Clar Clarinet Quartet, and Ozark Wind Quintet, and plays bass clarinet with the Arkansas Philharmonic Orchestra and the Drury Civic Orchestra.