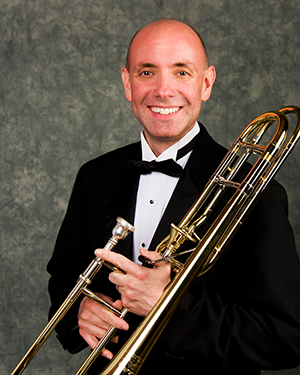 Trombonist John Prater joined the LR Winds in 2010. He also plays trombone with the Searcy Brass Quintet, and has performed with Quapaw Brass Quintet and Basso Voce tuba quartet. He is a band director in the Cabot Public School District, where he teaches all beginning low brass and conducts the Jr. High South Freshman Band. He also teaches applied euphonium at Arkansas State University-Beebe, where he began the band program.

Prater is a National Board Certified teacher. He received the “Essential Pieces” Education Award from Cabot Jr. High South, has been nominated for the National Stars of Teaching Award, and is a four-time honoree in Who’s Who Among America’s Teachers.

In addition to his regular teaching duties, Prater maintains a private studio of low brass students, and is the coordinator of the student usher program for LR Winds.